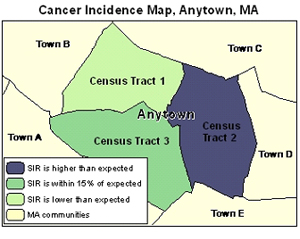 A standardized incidence ratio (SIR) is the most appropriate statistic to examine cancer incidence in a small area, such as a community or a census tract. For example, an SIR might be used to determine whether prostate cancer occurred more frequently than expected in Boston, compared to Massachusetts as a whole.

An SIR is the ratio of observed cancer diagnoses in an area to the number of expected diagnoses multiplied by 100. The expected number is based on the statewide cancer experience.

One calculation will generate:

For more information on standardized incidence ratios for cancer, see the FAQ.

When reviewing and interpreting Cancer data, it is important to take into consideration the following:

Available Data on SIRs for Cancer

Use the Explore Maps & Tables link link to access the following measure for cancer in your community. The most current available data will be shown. Be sure to check the site periodically for new data as it becomes available.

This page was last edited on: